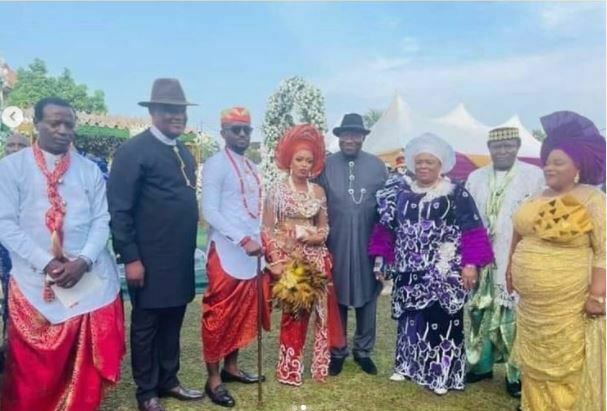 This is coming after the former president via his verified Facebook account posted beautiful photos from the wedding ceremony.

Jonathan via his post on Facebook had revealed that he had on Saturday, 13th November, joined his friend and colleague, Prof. Richard King for the traditional marriage of his daughter, Barr Lily King at Uyo.

He wrote; ”Today, I joined my dear friend Prof. Richard King and other well-wishers for the traditional marriage of his daughter, Barr. Lily King and Mr . Marvel Edric at Uyo, Akwa Ibom state. Congratulations to the couple, may God bless their union.”

Reacting to the post, one Prince Charles, noted that as a former president, Goodluck Jonathan should not be attending events such as traditional weddings due to protocol and ethics.

According to Prince, such events were unnecessary.

Prince Charles Ekanem IV wrote; “I might be wrong anyway but i feel as a former President and base on protocol ethics attending this kind of event is not necessary.”