Home > Articles > “Together Or Not, It Shall Be Well” – 2Face Writes As He Wishes Annie Happy Birthday

Popular Nigerian musician, 2Face has stirred reaction online after he shared a cryptic post on his Instagram account hours after his wife Annie Idibia, apologized to him, her mother and her mother-in-law.

2face on Saturday had posted a picture of himself with his wife on his Instagram story to mark her 37th birthday.

However, the statement attached to the post has attracted reactions, as 2face wrote, “Together or not, it shall be well” 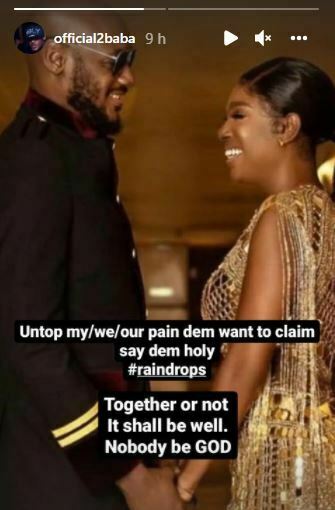 The singer also posted the same picture on his account and captioned it, “NOBODY HOLY PASS! #ONELOVERELIGION #GRATEFUL”

This is coming hours after Annie Idibia revealed that her accusations towards her husband in the recent scandal was based on her emotions and anger, thereby confirming Pero’s side of the story.

In an apology on her Instagram page, Annie stated what she wanted for her 37th birthday was peace hence the reason for the apology.

Meanwhile, the apology of the Nollywood actress saw Pero Adeniyi, baby mama to 2face slam his wife Annie Idibia with an N500m lawsuit.

In the lawsuit, filed on November 10, 2021, Pero’s lawyers stated that Annie’s outburst on Instagram and her allegations that her husband had left their home to be with her in America were false while maintaining that due to these allegations their client and her kids were being bullied online.