A former student of the Federal University of Technology, Owerri, Precious has gone down memory lane, recounting how she got expelled from school while battling a bad divorce.

According to Precious whilst sharing a throwback photo via the microblogging platform, Twitter, revealed how her course adviser laid a false accusation on her after failing to sleep with her.

She added that she was a disaster at the time as she was also battling a terrible divorce while nursing her kid.

Sharing the photo, she wrote;

“Saw this picture today and I was crying like a baby. Was carrying a baby to class every day and fighting a bad divorce. While at it, I got expelled. My course adviser couldn’t get me to bed so he said that I beat him up. I was disaster at the time.

Loook where I am now.” 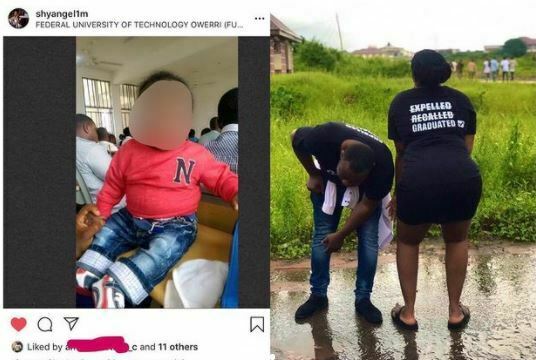 Meanwhile, a married woman who reportedly stole and ran away with her husband’s money has been arrested by security operatives alongside her boyfriend.

According to reports, the woman who is from Chitungwiza in Zimbabwe reportedly stole $1,500 from her husband and ran away with it. She was later caught with her boyfriend at Gombe Lodge in Seke, Chitungwiza, two days after and taken into police custody.

Sharing photos on Facebook, Within Zimbabwe wrote; ‘Chitungwiza married woman stole $1,500 from her husband and ran away.The husband went to seek help from Mapositori. She was caught 2 days after while spending the money together with her Boyfriend at Gombe Lodge in Seke, Chitungwiza.’ See photos here.

READ  One dies, three trapped in another Lagos building collapse