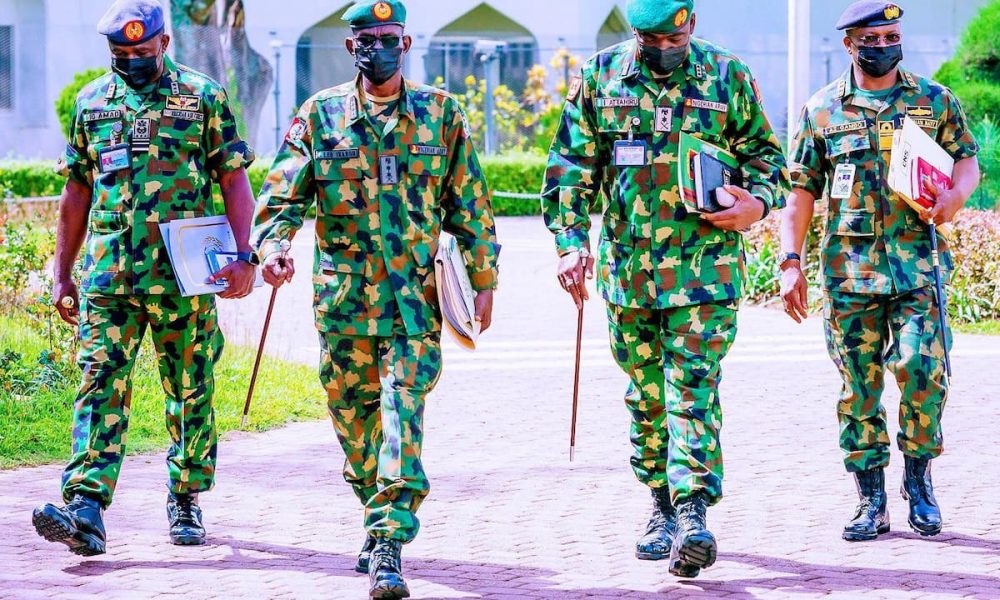 Following the attack on Damboa town in Borno State by ISWAP fighters, the Minister of Defence, Maj.-Gen. Bashir Magashi (Rtd), and the service chiefs have arrived in Maiduguri.

Naija News reports that the minister led the security hierarchy to the state to assess ongoing counter-insurgency operations in the theatre of war.

The minister and the service chiefs were received by the Theatre Commander of Operations Hadin Kai. Maj. General CG Musa, along with his field commanders.

However, the military commanders are currently in a closed-door meeting to strategize on tackling the security threat posed by Boko Haram and ISWAP fighters.

The insurgents stormed the village around 5: 34pm, attacked a mobile police base in the town and killed two mobile policemen (MOPOL) on duty.

According to an aid worker, the ISWAP fighters invaded the community on utility vehicles and started shooting sporadically at residents who fled their homes into bushes for safety.

The worker added that hundreds of people are in the bushes and are scared to return to their homes following the heavy gunshots.

According to the source, the attack by the insurgents is the second in two weeks.

A military source told Daily Trust that the insurgents invaded the town with several Anti-Aircraft guns (AA) and other military hardware.

“They came with several AA guns mounted on utility vehicles, shooting heavily and attacked the Mopol base but unfortunately they overpowered the police before entering into the town.

“I can confidently tell you that they didn’t attack the troops from the Nigerian Army’s 25 Taskforce Brigade in Damboa.” the source added.